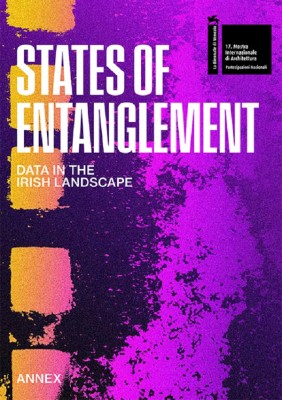 States of Entanglement addresses the utopian fantasy that surrounds the Cloud, as transcending physical presence or resourcing. By bringing the physical infrastructure around data, and its impact on the environment under the spotlight, it hopes to reframe how we understand data production and highlight the myth that information technologies are hidden and without major material manifestations on the landscape. The context for the book is Ireland, which has a significant historical role in the evolution of global communications and data infrastructure. In 1866, the world’s first transatlantic telegraph cable landed on the West coast of Ireland. In 1901, the inventor of the radio Guglielmo Marconi transmitted some of the world’s first wireless radio messages from Ireland across the Atlantic Ocean to Newfoundland. Today, Dublin has overtaken London as the data centre hub of Europe, hosting 25% of all available European server space. And by the year 2027, data centres are forecast to consume a third of Ireland’s total electricity demand. The book aims to raise awareness around the hardware of the global internet and Cloud services, which is interwoven with the Irish landscape—made manifest through the vast constellation of data centres, fibre optic cable networks, and energy grids that have come to populate its cities and suburbs over recent decades.