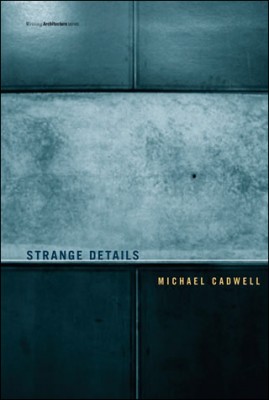 Confronted with the intricate construction details of Italian architect Carlo Scarpa's Querini Stampalia Gallery—steel joined at odd intervals, concrete spilled out of concatenated forms, stone cut in labyrinthine patterns—Michael Cadwell abandoned his attempts to categorize them theoretically and resolved instead to appreciate their idiosyncrasies and evoke their all-embracing affects. What he had dismissed as a collection of fetishes he came to understand as a coherently constructed world that was nonetheless persistently strange. In Strange Details, Cadwell looks at the work of four canonical architects who "made strange" with the most resistant aspect of architecture—construction. In buildings that were pivotal in their careers, Scarpa, Frank Lloyd Wright, Mies van der Rohe, and Louis Kahn all created details that undercut our critical and analytical terra firma. Cadwell explores the strangeness in the material menagerie of Scarpa's Querini Stampalia, the wood light frame construction of Wright's Jacobs House, the welded steel frame of Mies's Farnsworth House, and the reinforced concrete of Kahn's Yale Center for British Art. Each of these architects, he finds, reconfigures the rudimentary facts of construction, creating a subtle but undeniable shift in a building’s physicality. And for each of them, nature is strange, and its strangeness infects; nature unmoors exhausted cultural ideas, constricted analytical procedures, and outmoded production techniques. An awakening to nature's strangeness forces a new sense of the world, one that we can detect in these architects' configurations of the world's materials—their strange details.