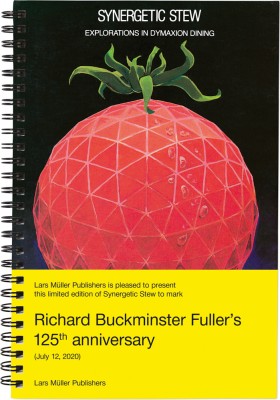 Buckminster Fuller is globally known as a design scientist, architect, author, poet, engineer and a true visionary. On his 86th birthday he received the cookbook Synergetic Stew as a surprise present from his friends and admirers, who share recipes along with personal anecdotes and humorous recollections of Fuller (for example, a reminiscence about Bucky’s love for tea in all its variations). Scattered throughout the book are enticing texts and poems from Fuller himself, including even a recipe for tomato ice cream.

Constructed around 100 achievable recipes, this book is a glimpse into Fuller’s life, as told by his peers. A few of the recipes are a joyful ode to Fuller’s oeuvre, such as Shirley Sharkey’s “GEODESICANDY,” the “Macrobiotic Diet” by John Cage or Amy Edmondson’s “Allspace-Filling Whole Wheat Bread.”

In addition to the facsimile, Jamie Snyder reflects upon often-overlooked facets of Bucky’s character, as revealed through anecdotes of his relationship to food.