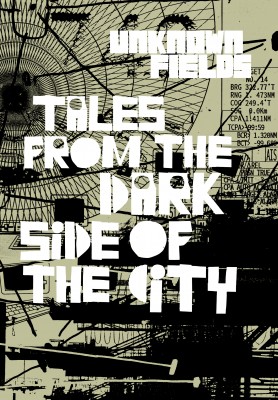 Tales from the Dark Side of the City Box Set

Unknown Fields is a nomadic design studio that ventures out  on expeditions into the shadows cast by the contemporary city, to uncover the industrial ecologies and precarious wilderness its technology and culture set in motion. Tales from the Dark Side of the City is a book series that forms an atlas to the territories and stories of a city that stretches across the entire planet,  a city that sits between documentary and fiction, a city of dislocated sites, of drone footage and hidden-camera investigations, of interviews and speculative narratives,  of toxic objects and distributed matter from distant grounds. They are a collection of tales from the constellation of elsewheres that are conjured into being by the city’s wants and needs, fears and dreams.

The series includes stories developed from expeditions through Bolivia and the Atacama Desert, the Western Australian Outback, the South China Sea and Inner Mongolia, the gemfields of Madagascar, Far North Alaska and the black sites of the United States.