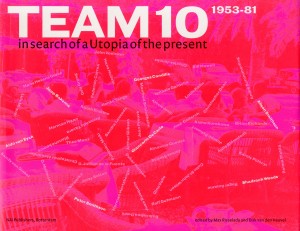 Team 10: 1953 – 1981: In search of a Utopia of the Present is the first publication about the ideas and work of Team 10 - the group of European architects who took a leading part in the debate on cities and architecture in the 1950s and 1960s. The project will bring together the various protagonists of Team 10 with a focus on the most active members: Alison and Peter Smithson from England, Aldo van Eyck and Jaap Bakema from the Netherlands, Giancarlo de Carlo from Italy and Georges Candilis and Shadrach Woods from France. Research into hitherto closed collections and archives has brought new insights and a considerable number of unknown documents.

Team 10 was of great importance for the development of post-war architecture and urbanism.  It was Team 10 who first questioned the large-scale, technocratic and abstract nature of modernist architecture and who argued for the introduction of the human scale, the importance of community, and the perspective of a continuous process of transformation of place instead of the production of finished buildings. Their influence on subsequent generations of architects has been immense, and one could argue that many of the achievements of the discipline since the 1970s were made possible by the issues and designs defined by Team 10.