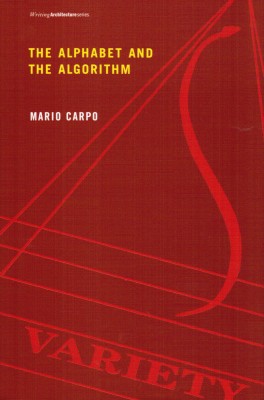 Digital technologies have already changed architecture—architectural form as well as the way architecture is designed and built. But if the digital is a revolution, which tradition is being revolutionized? If it is a "paradigm shift," which architectural paradigm is shifting? In The Alphabet and the Algorithm, Mario Carpo points to one key practice of modernity: the making of identical copies. Carpo highlights two instances of identicality crucial to the shaping of modern architecture: in the fifteenth century, Leon Battista Alberti’s invention of architectural design—the humanistic idea of building as the identical replication of an author’s intentions; and, in the nineteenth and twentieth centuries, the mass production of identical copies from mechanical master models, matrixes, imprints, or molds.