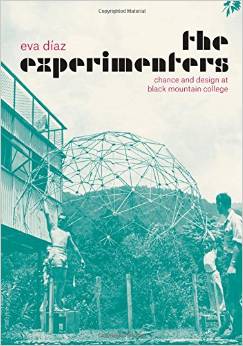 Practically every major artistic figure of the mid-twentieth century spent some time at Black Mountain College: Harry Callahan, Merce Cunningham, Walter Gropius, Willem and Elaine de Kooning, Robert Motherwell, Robert Rauschenberg, Aaron Siskind, Cy Twombly - the list goes on and on. Yet scholars have tended to view these artists' time at the college as little more than prologue, a step on their way to greatness. With The Experimenters, Eva Diaz reveals the influence of Black Mountain College - and especially of three key instructors, Josef Albers, John Cage, and R. Buckminster Fuller - to be much greater than that. Diaz's focus is on experimentation. Albers, Cage, and Fuller, she shows, taught new models of art making that favored testing procedures rather than personal expression. The resulting projects not only reconfigured the relationships among chance, order, and design - they helped redefine what artistic practice was, and could be, for future generations. Offering a bold, compelling new angle on some of the most widely studied creative minds of the twentieth century. The Experimenters does nothing less than rewrite the story of art in the mid-twentieth century.