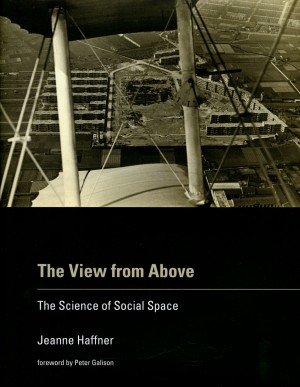 In mid-twentieth century France, the term "social space" - the idea that spatial form and social life are inextricably linked – emerged in a variety of social science disciplines. Taken up by the French New Left, it also came to inform the practice of urban planning. In The View from Above, Jeanne Haffner traces the evolution of the science of social space from the interwar period to the 1970s, illuminating in particular the role of aerial photography in this new way of conceptualizing socio-spatial relations.

As early as the 1930s, the view from above served for Marcel Griaule and other anthropologists as a means of connecting the social and the spatial. Just a few decades later, the Marxist urban sociologist Henri Lefebvre called the perspective enabled by aerial photography - a technique closely associated with the French colonial state and military - "the space of state control." Lefebvre and others nevertheless used the notion of social space to recast the problem of massive modernist housing projects to encompass the modern suburb itself - a critique that has contemporary resonance in light of the banlieue riots of 2005 and 2007. Haffner shows how such views permitted new ways of conceptualizing the old problem of housing to emerge. She also points to broader issues, including the influence of the colonies on the metropole, the application of sociological expertise to the study of the built environment, and the development of a spatially oriented critique of capitalism.