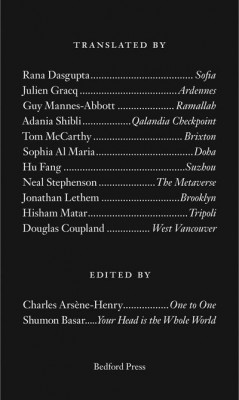 Edited by Charles Arsène-Henry and Shumon Basar
Translated By is published to coincide with an exhibition at the AA, which gathers eleven literary writers and eleven literary places and subjects them to an act of immaterial translation – via the voice.

The stories run through Ramallah, recollect turn-of-the-century Sofia, remember the spaceship-looking-Sheraton Hotel in Doha, wander through the 'Metaverse' and end at the end of the world in West Vancouver. Each of the authors invent or interpret place. Mundane, marginal, infamous, impossible. Together, the texts create a strange and beautiful territory that traverses distance and time.