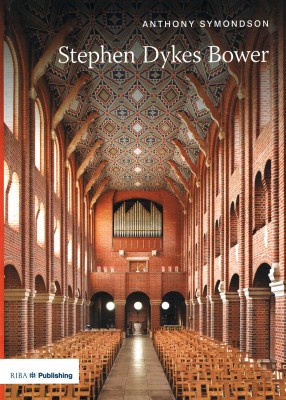 Stephen Dykes Bower (1902-1993) was unique among twentieth-century British architects as a sincere practitioner of Gothic design whose career was mainly in the post-1945 period.  He rejected modernism and continued traditions from the late Victorian period, with an emphasis on fine detail, craftsmanship and bright colour.

He built four completely new churches, including the remarkable, richly-patterned St John’s at Newbury.  At Bury St Edmunds his extension of a parish church into a cathedral - ‘our finest modern cathedral’ in the view of Sir John Betjeman - was spectacularly completed in 2005 with the addition of a crossing tower, designed by Warwick Pethers, the last of his assistants.

Most of Dykes Bower’s work was in the context of older buildings, including Westminster Abbey, where he cleaned the grimy stonework of the interior and added sparkling colour to the monuments.  At St Paul’s Cathedral, he created the high altar and baldacchino.  Parish churches across England bear witness to his skill and care and to the team of craftsmen in silver, iron, stone and decorative painting that carried out his designs.  In addition, he was an expert on organs and their cases, and one of the best designers of fine embroidered vestments, frontals and hangings. He rescued unfashionable and rejected church fittings of high quality and used them to add beauty to churches in deprived areas.

Anthony Symondson draws on many conversations with Stephen Dykes Bower and people who knew and worked with him to create a revelatory account of a largely unknown career.  It follows the same author’s major study, Sir Ninian Comper (2006). This book will appeal to those interested in churches and their decoration, to professionals involved in church design and conservation, and to all who are interested in the alternatives to Modernism in the twentieth century.