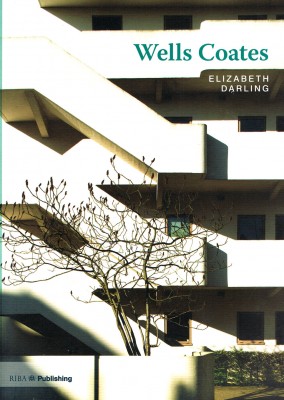 This book is an account of the life and work of Wells Coates, one of the pioneers of British Modernism.  Born in Japan to missionary parents from Canada, Coates studied engineering in Canada and England before pursuing architecture.  Despite having no formal training, Coates went on to become a leading architect of his generation working in Britain in the inter-war years.

An innovative and inventive man with many strings to his bow – an engineer, teacher, architect and product designer to name a few – Coates was at the forefront of the development of the Modernist movement in Britain.  His designs such as the Lawn Road Flats in London - one of the earliest and most influential modern apartment blocks - and Embassy Court in Brighton, were truly transformational and offered a new solution to the problems of urban living. Coates was not only a seminal figure in the development of the Modernist architectural style in Britain, he was also a tireless champion of the modernist cause.  In 1933 he and four other architects and critics founded the MARS (Modern Architectural Research) group, which produced groundbreaking plans and exhibitions.

The outbreak of World War II and the subsequent decline in commissions in the post-war years brought a halt to his flourishing career. Coates returned to his native Canada where he continued to design modernist housing.

In recent years several of Coates’ most notable projects – the Lawn Road Flats, Embassy Court and parts of Palace Gate – have been renovated, underlining the notion that his ideas of what it meant to live well in the 1930s are still pertinent today.