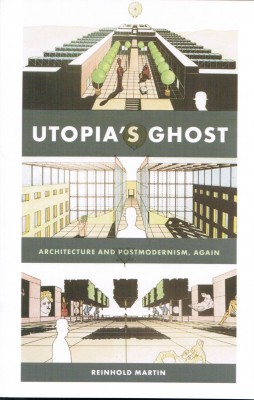 Architectural postmodernism had a significant impact on the broader development of postmodern thought: Utopia’s Ghost is a critical reconsideration of their relationship. Combining discourse analysis, historical reconstruction, and close readings of buildings, projects, and texts from the 1970s and 1980s, Reinhold Martin argues that retheorizing postmodern architecture gives us new insights into cultural postmodernism and its aftermath. Much of today’s discussion has turned to the recovery of modernity, but Martin writes in the Introduction, “Simply to historicize postmodernism seems inadequate and, in many ways, premature.” Utopia’s Ghost connects architecture to current debates on biopolitics, neoliberalism, and corporate globalization as they are haunted by the problem of utopia. Exploring a series of concepts—territory, history, language, image, materiality, subjectivity, and architecture itself—Martin shows how they reorganize the cultural imaginary and shape a contemporary biopolitics that ultimately precludes utopian thought. Written at the intersection of culture, politics, and the city, particularly in the context of corporate globalization, Utopia’s Ghost challenges dominant theoretical paradigms and opens new avenues for architectural scholarship and cultural analysis.